The simplest definition is: Retrofuturism is the future as envisioned by the past.

Broadly, retrofuturism is books, movies, comics, and other types of art that imagine the future based on the time period they were produced. It can also be a genre encompassing contemporary creations based on previous time periods.

I break retrofuturism down into two subcategories:

Artifacts – These are film/video, books, magazines, advertisements, products, and more from the past that envision future technology and society.

Retrofuturist Genre – These are modern day art, literature, film, and more that mimic retro styles and visions of the future as envisioned by a previous era or time period. By some definitions, this can also include the flip side of that (often seen in Steampunk works) where modern or futuristic technologies are applied to a historic time.

Learn more about the different types of retrofuture below. 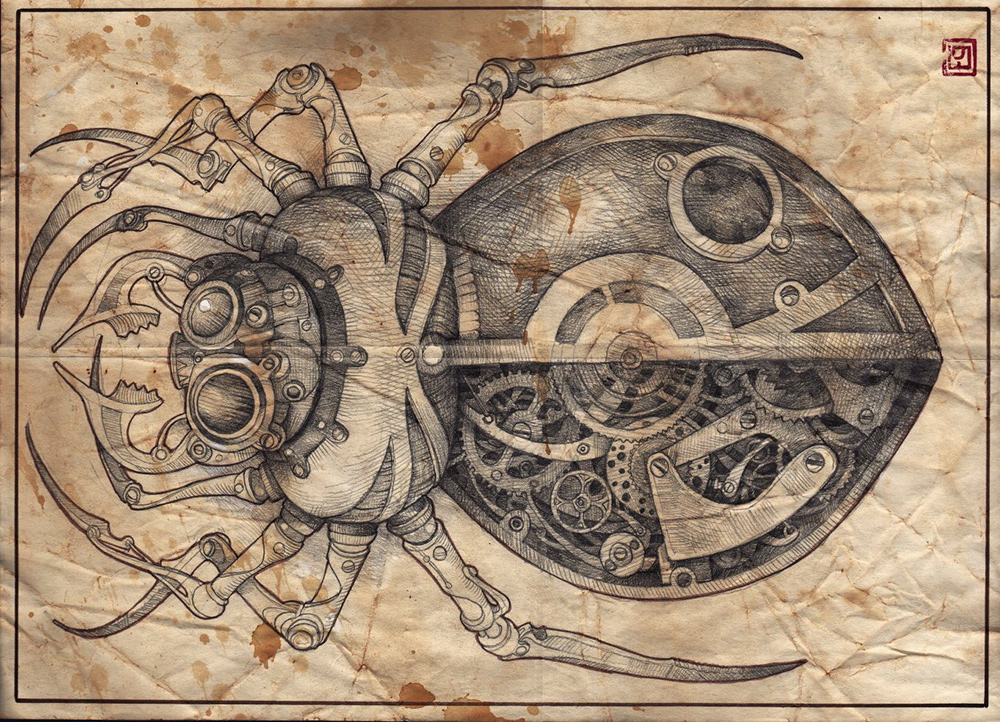 “Mechanical Insect” by artist Francesc Grimalt
Steampunk is one of the most popular types of retrofuturism. It’s known as a literary genre as well as an aesthetic design style. In Steampunk literature, the stories are frequently sent in an alternative history of the Victorian era (19th century) or a fantasy world or future that relies on steam-powered mechanics. Most retrofuture based on steampunk involves imagining future technologies as they would be envisioned by people in the 19th century. HG Wells and Jules Verne are the most popular examples of Steampunk as a literary genre. The term Steampunk originates from the 1980s as a play on “cyberpunk” to describe the style of literature by Tim Powers, James Blaylock, and K.W. Jeter.

As a visual, fashion, or artistic aesthetic, common themes include Victorian settings, art nouveau design and modern objects modded into a steampunk style. Artists and fans often do a lot of DIY work to create objects, costumes, and art pieces blending our contemporary world with the steampunk vision. Airships, gears, and muted natural colors are common in Steampunk. Check out Steampunk posts.

Dieselpunk, a successor sub-culture to the Steampunk movement, is growing in popularity. As with Steampunk, the “punk” element refers to the reinvention of the future, in this case with the aesthetics of the interwar years in the U.S. This was the period of the Chrysler building, of thrilling new technologies in the air, of the explosion in the production of the internal combustion engine, and of sinister but exciting new arms. This was the era of Detroit; jazz, big band, and swing; and glamorous transatlantic travel; as well as true movie stars, Prohibition, radio, skyscrapers, outrageously impressive cars, and serious talk of going to the moon. More than anything this was the era when U.S. power was unchallenged industrially, militarily, and culturally, and when the future too was all-American.

The term was coined in 2001 by game designer Lewis Pollak for his RPG game Children of the Sun. Art and books in the Dieselpunk genre have an industrial feel, often blending with art deco and raygun gothic design. For fiction, pulp adventure stories, weird horror, hardboiled detective, and noir are frequently included under the dieselpunk definition. Alternative history and World War II are frequently found in modern dieselpunk stories. Check out some Dieselpunk posts.