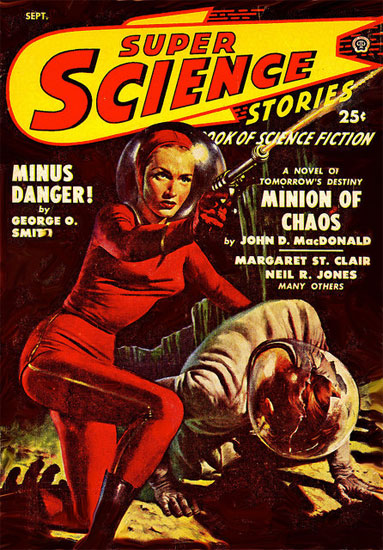 We already know I’m a huge retro-sci-fi fan, but one of the things that irks me the most about vintage magazine and book covers is how often the women on them are portrayed as “damsels in distress”. They’re often falling victim to evil robots, scary space monsters, or clothing that just won’t stay on their busty bodies.

Although those sexist images are the ones that most often come to mind when you think of pulp stories of yesteryear, there are some glorious vintage covers that feature ladies as more than a trope.

The Conquest of the Moon Pool 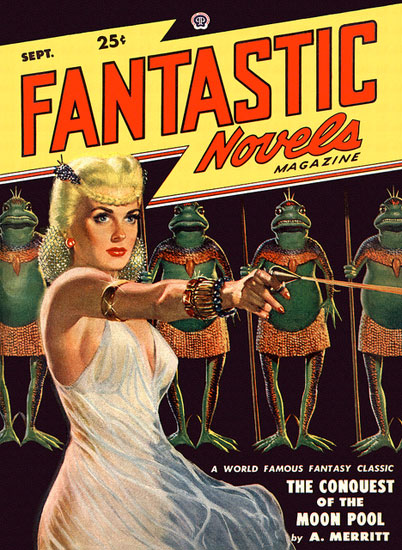 Buy an original copy of the magazine.

From “Fantastic Novels” September 1948, we get this interesting cover illustration by Lawrence Sterne Stevens for the story “The Conquest of the Moon Pool” by Abraham Merritt. Who the blonde woman in the Marylin Monroe-style dress on the cover is I don’t know, but it’s evident she’s in charge with her laser-gun and her army of toad-like creatures from the center of the earth. Source

The Rebel of Valkyr 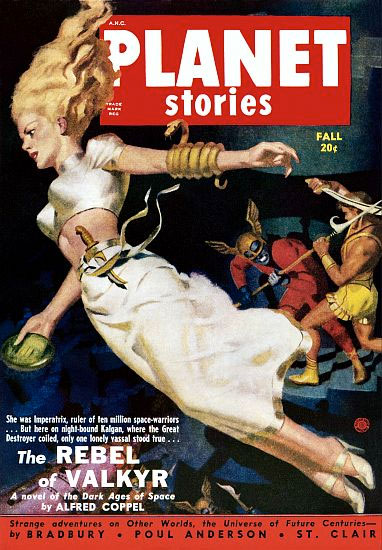 and a gorgeous cover illustration to go with it. The lady at the center of the cover is Imperatrix, “the ruler of 10 million space warriors.” How closely this relates to the text I don’t know, but she has a dagger and isn’t being rescued by everyone. She does lose points for the impractical shoes. 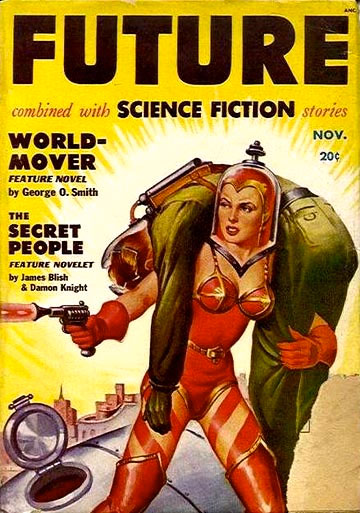 I’m not sure which story this vintage cover illustration is supposed to go with, but I love it. Our leading lady is carrying her wounded (possibly dead? Looks like his helmet is obliterated. Hard to tell what’s going on with the atmosphere on this planet) colleague over her back while fighting off unseen enemies with her raygun. Again, her outfit seems to be a little impractical (I’m seeing a theme here) but it’s nice to see a man being damseled for once. 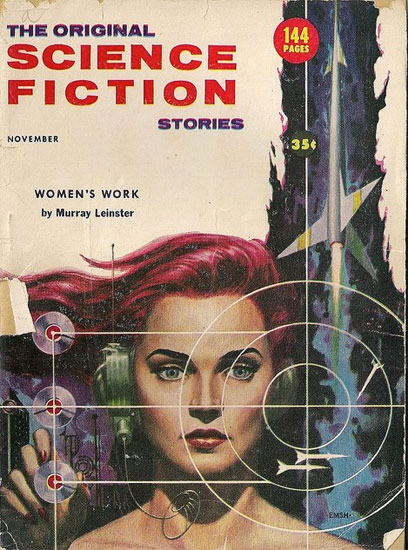 Here’s something a little different. This cover for the November 1956 issue of “The Original Science Fiction Stories” has a stunning image for the story “Women’s Work” by Murray Leinster

. I can’t find any summary for the story, but the cover alone makes me interested. Featured prominently on this magazine cover is a woman working as some sort of radar operator or possibly launching rockets or missiles. 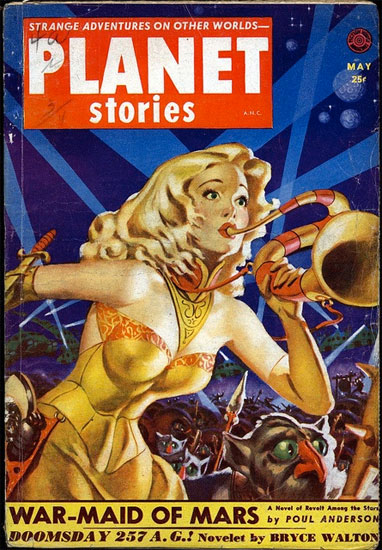 Buy this cover as a poster.

Another from “Planet Stories”, the cover of the May 1952 issue features an illustration of a blonde-haired warrior woman leading her martian army into battle. Is that a pistol on her hip? 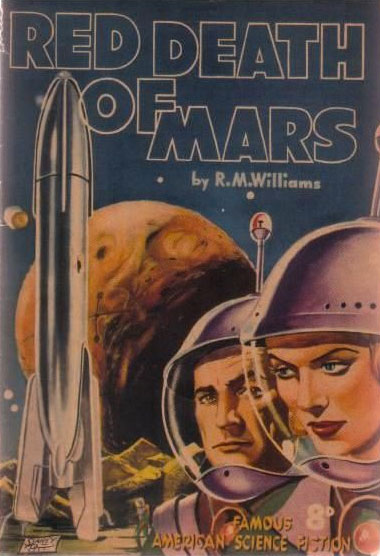 from 1952 features a prominent lady-astronaut ready to blast off with her male companion to Mars. 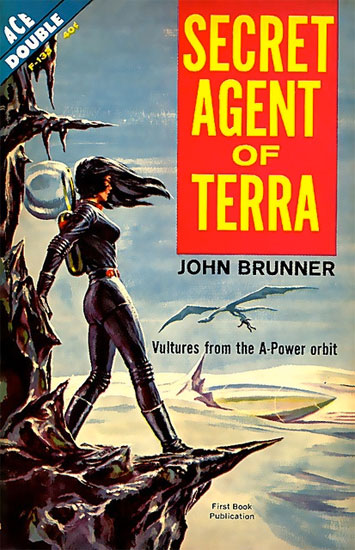 Buy the book on Amazon

This 1962 cover for the John Brunner novel Secret Agent of Terra features the character Maddalena, who is trying to prove her worthiness as a member of the Corps Galactica. Note the practical footwear. [Source] 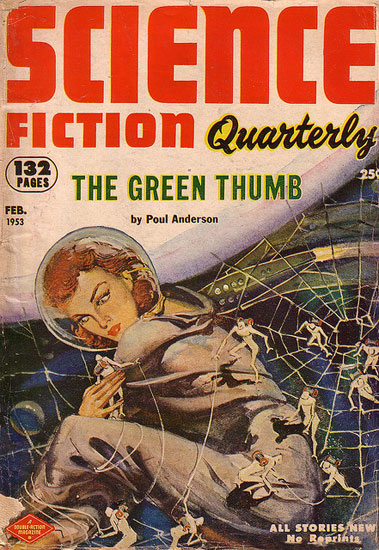 . Tiny web-weaving creatures are attempting to tie up the lady on this cover, though I think she has the upper hand. Cover by A. Leslie Ross. [Source] 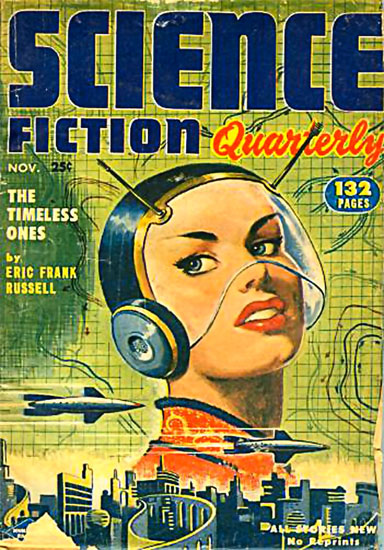 Another vintage scifi cover I absolutely love from the November 1952 issues of “Science Fiction Quarterly”. That helmet to to die for. 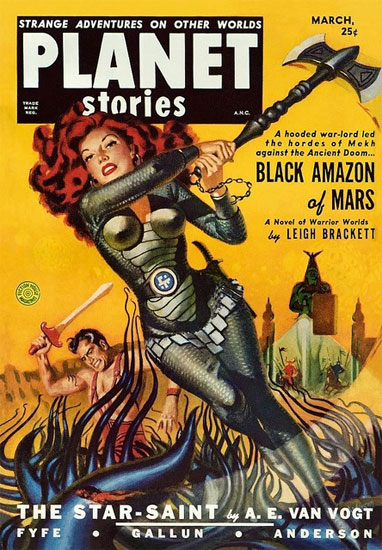 Buy this cover as a poster
Another classic pulp cover from “Planet Stories” for their March 1951 cover. The illustration for Leigh Brackett’s “Black Amazon of Mars” 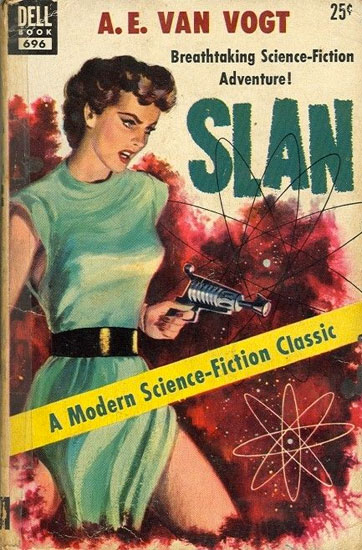 The Black Priestess of Varda 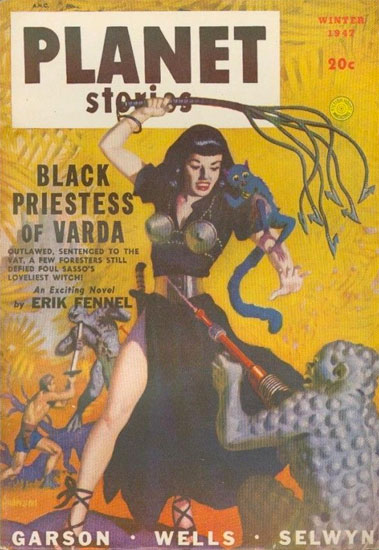 The Black Priestess of Varda

makes a menacing subject for the Winter 1947 cover of “Planet Stories”. With her whip and her blue lemur-creature she’s fighting off gray bumpy villains.

Sword of the Seven Suns 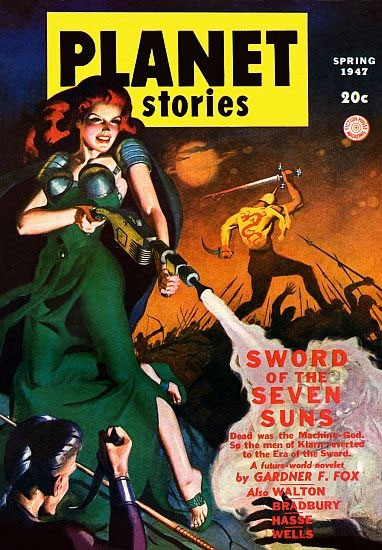 Buy as a poster.

“Planet Stories” Spring 1947 featured a vivid cover for “Sword of Seven Suns” where they’ve reverted to the “era of the sword” yet our leading lady is wielding a futuristic gun that’s either spewing some sort of gas or otherwise enveloping in the enemy in a high-tech soul-sucking vapor. (Note the impractical shoes.)

We’re finishing off this list with a fantastic cover from “Super Science Stories” September 1949. Though the illustration is similar to the “Future Combined with Science Fiction Stories” earlier on the list, with our raygun wielding leading lady protecting her wounded companion, in this iteration she’s wearing a fantastic (and slightly more practical) red spacesuit. Cover: Lawrence Sterne Stevens. [Source]

I know this isn’t a comprehensive list of all of the awesome non-damseled covers out there, so please share any others in the comments! 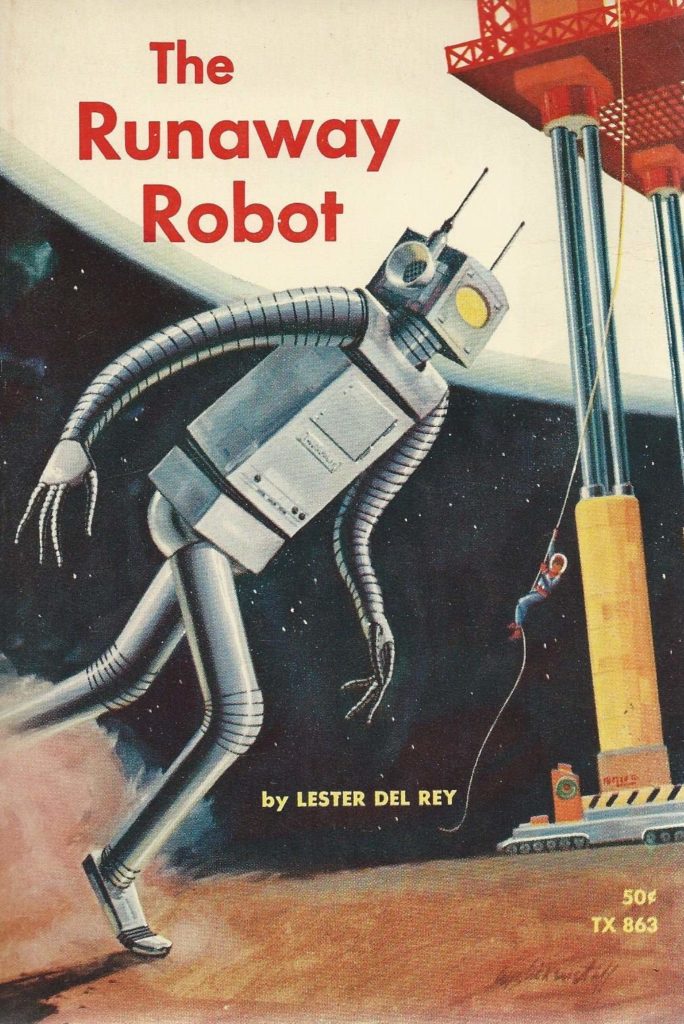 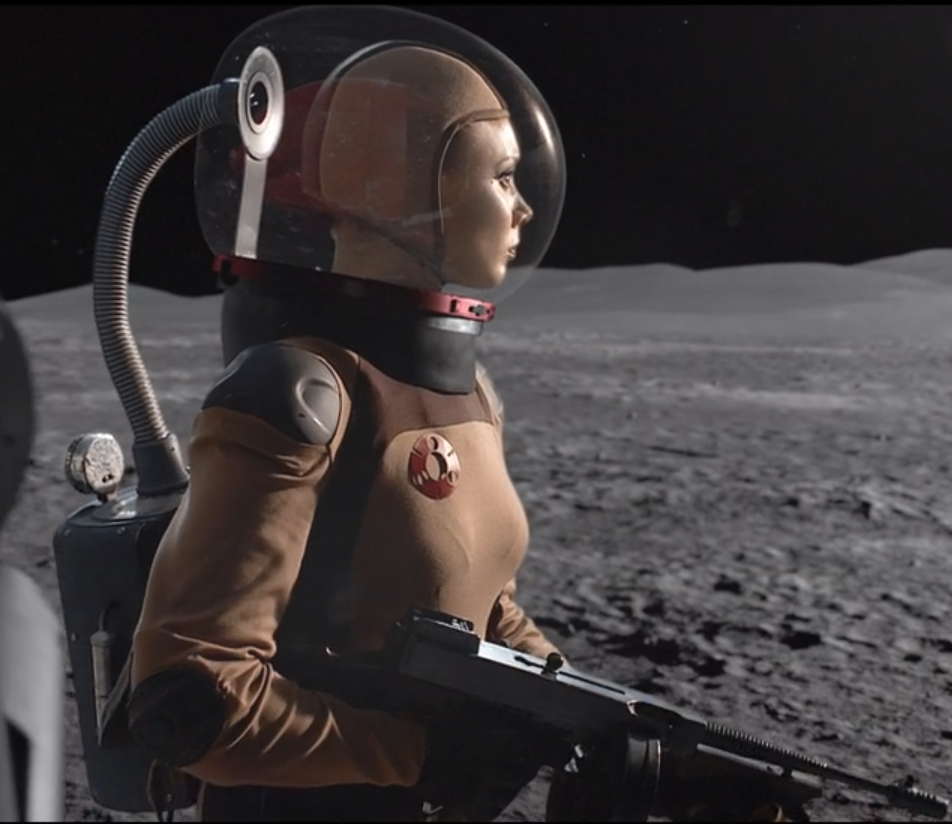